A Cup of Conversation with author Gillian Poucher

Hello and welcome to A Cup of Conversation where I am joined by debut author Gillian Poucher who is releasing her book After The Funeral this month. It’s definitely on my To Be read List and in this interview Gillian shares an extract from the book with us as well revealing her writing process and her experience of being published through Red Door Books. So thank you for joining us and thank you too to Anna at Red Door Books for linking us up! 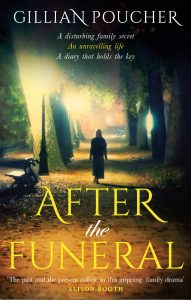 I loved creative writing at school and have fond memories of two particular teachers who encouraged me in this.  When I was eight, I told people I wanted to be a children’s writer.   Then studying and work took over and whilst I continued to read voraciously, my dream of writing settled on the back burner until I was on maternity leave in 2011.  I took an introductory course with the Open University, and began a Writers Bureau course.  Then the idea for After the Funeral developed and I gave up the course to focus on the novel.

2. I have visited Lincolnshire many times. Can you tell me how the area inspired your debut novel After The Funeral.

People often talk about Lincolnshire’s ‘big skies.’  Very generally, driving around this rural county under these big skies sparked my imagination.  More specifically, Lincolnshire is known as ‘Bomber County’ because of its war time aviation history.  It’s a large county but not well-known.  That it became so significant in the Second World War before fading back into obscurity fascinates me.  Visiting Scampton churchyard for the first time, I was very moved to see the rows of war graves.  One of the most famous campaigns from RAF Scampton was the Dambusters raid, which is significant in the novel.  Lincolnshire has many beautiful churches too, ranging from the magnificent Lincoln cathedral to tiny obscure churches such as St Ediths at Coates by Stow.  Again, these atmospheric historic sites inspired me.

3. In a nutshell, what is After The Funeral about and what do you hope your readers will take away with them?

After the Funeral is a novel about a middle-aged woman’s life falling apart.  The pieces are reassembled in an unexpected way.  Julia is used to being in control and thinking she has the answers, but finds that things are more complicated than she realised, especially within her family.  I would like readers to take away the hope that even if things don’t work out as we hoped or planned, there are other ways of finding new beginnings and meaning.

4. Which of your characters is your favourite and why would your readers like them?

My favourite character is Linda.  I hope readers will like her – from Julia’s perspective she is overpowering and threatens her understanding of her family.  But I like her for her unconventionality, her creativity as an artist, and her warmth and humanity.

5. Can you share a short extract from the book with us and tell us why you have chosen this scene?

I’ve chosen the extract from Chapter 13 because it brings together several of the main characters and shows how Linda, the stranger who turned up at Julia’s mother’s funeral, disturbs the family.  It’s one of the scenes I most enjoyed writing, and came to me very vividly.  I liked thinking about everyone’s reactions to the dishevelled gatecrasher at an eightieth birthday lunch.  More seriously, there can still be a stigma around counselling and mental illness and I could bring that out in this scene as well.

Linda swayed down the three steps into the dining area.  She wasn’t wearing a coat.  Rain dripped from her short geometrically patterned orange and turquoise dress on to the crimson carpet.  Her long curly hair lay tangled about her shoulders like seaweed.  Mascara had run down her cheeks and her heavily made up eyes looked bruised from lack of sleep.  ‘Julia!’ she called again. ‘I’m so pleased to find you!’

Julia felt a deep flush rise to her cheeks as all eyes turned to her.  She didn’t move.  The wine had gone to her head.  She was afraid she would stagger if she rose and went over to Linda.  And actually she wanted to pretend she didn’t know the bedraggled woman who was wending her way towards her, obviously drunk.

‘Whoever is this?’ rapped out Ada as her guests continued to stare between Linda and Julia.  ‘And who let her in?  This is a private party!’  She turned to the acne riddled waiter.  ‘You, boy, don’t just stand there gawping!  Go and fetch the manager!’  Then she glared down the table towards her niece.  ‘Julia, is she one of your cases?’

“‘One of Julia’s cases?’”  Linda threw her head back and laughed wildly.  She staggered towards the table.  ‘Let me guess.  You must be Ada.’  She leaned across the table towards the old woman in the wheelchair, picking up a bottle of red wine.  Ada stared at her.

‘Do you think she’s dangerous?’ squawked Edith.  No-one moved or responded, frozen by the unexpected visitor.

The artist’s hand was shaking as she raised the wine bottle to her magenta lips.   ‘Happy birthday, Ada!’  She tipped her head back, and took a long draught, then tottered to the top of the table.  There she waved the bottle around the room of mesmerized guests.  ‘And good health to you all!’ she slurred.

‘Who are you?’ said Ada, an unusual quaver in her voice.  ‘What do you want?’

Linda laughed raucously.  “‘What do I want?” she asks.  “Who am I?”’  She stumbled the last few steps towards the old woman, then bent down so her face was level.  Ada shrank back in her wheelchair.  ‘Have a good look.  I’m sure you can work it out.’

Ada stared back at her and began to tremble.  Julia had never seen her aunt afraid and felt an unexpected jolt of sympathy for her.  The old lady’s fear broke the spell which had mesmerised the guests.  Pete rose to his feet, as did James at the other end of the table.

‘I think you should leave.’  James spoke calmly but firmly as he drew alongside Linda.  He laid a hand on her arm.  The other guests murmured assent.  ‘I don’t know who you are, but you shouldn’t be troubling my aunt, a defenceless old lady.’

‘Defenceless you call her, do you?’  Linda threw her head back with a cackle of laughter, shaking off James’ hand.  She looked around the table.  ‘You don’t know the half of it, do they, Ada?’

6. what  are you currently working on?

I’m working on a sequel to After The Funeral.  I have ideas for another 2-3 novels, but I haven’t finished yet with the characters in After the Funeral!

7. How did you prepare your book for release?

It’s been a completely new experience!  I thought I’d checked the novel very carefully before submitting, but was shocked at how even on the third/fourth proof reading I found errors or inconsistencies.  Many thanks to Heather at RedDoor who was very patient!  Another steep learning curve has been trying to get to grips with social media and setting up a new website – I wouldn’t have managed this without the support and expertise of Angela Montague at Push Creativity.

8. Who has had the most significant impact on your writing and how have they supported your journey as a writer?

Writing After the Funeral took place almost in secret, with only my immediate family knowing about it.  I was terrified I would never finish it!  Two books have been enormously helpful, and I’ve gone back to them again and again when I lost confidence and faith in the novel.  One dates back to 1934, but still relevant to an aspiring writer: Dorothea Brande’s Becoming a Writer.  The other is Julia Cameron’s sparky and inspiring The Artist’s Way.

A total planner – I sketched out a chapter plan before I started writing After the Funeral.   Although I had to make minor adjustments as I wrote, the book stayed pretty close to the original plan.

Thank you for joining us Gillian and I wish you all the best as you launch your book! This was certainly a most insightful interview and to my weekly readers, if you would like to link up with Gillian you can do so on her links listed below.

Until next week, Happy Reading, happy Writing, happy You.