Get the 12 Part Writer’s Guide Manual To Help You Write, Publish and Market Your Book….Click here for full details

A short story - In A Nutshell

Helen, wallowing in pain and shunning the world and everyone around her, happens across an inspirational quote in her local store after leaving the house for the first time in weeks. Instantly, its message awakens something within her and she books a flight to a country she has always wanted to go.

In India the sounds, sights and colours of this spiritual place evoke a new awareness within her and the promise of release from the agony of her husband’s infidelity.

An impromptu encounter and an invitation to a local wedding open up an unexpected path and a flood of long-forgotten feelings.

Unlocked is a short story I released Christmas 2019 having entered the story into a writing competition with Spread The Word the year before. It was one of 14% of entries which received a second read by the judging panel. This is the first short  story I had ever written and I was delighted that it reached the position it did. 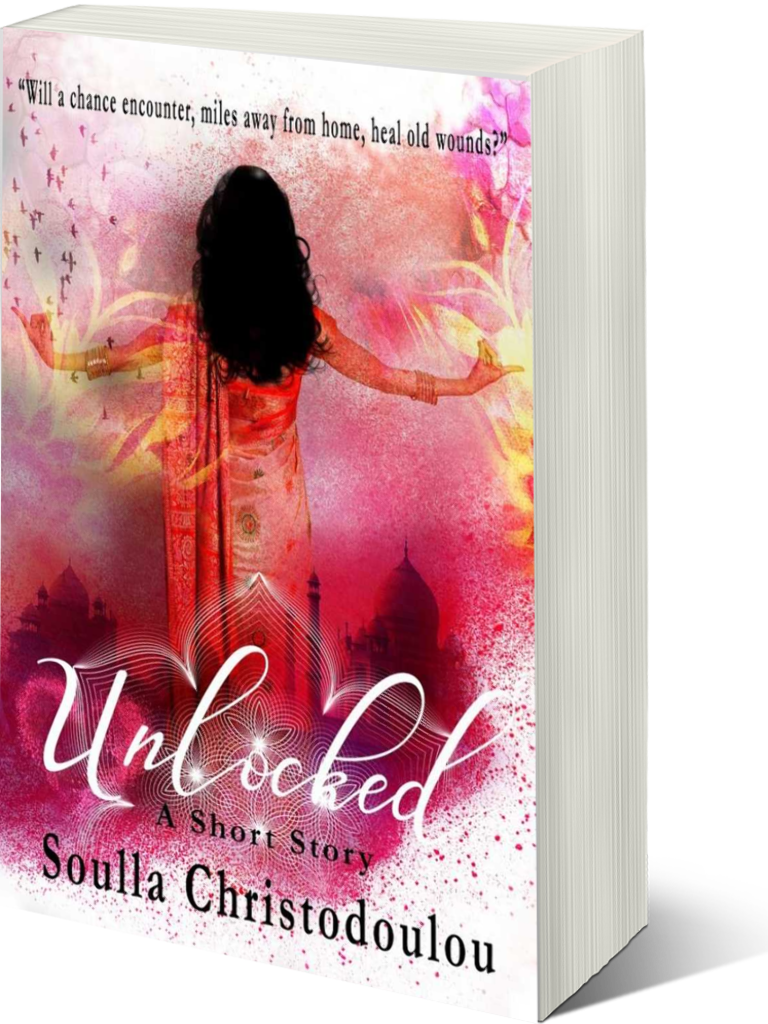 Buy It On Amazon

Helen has isolated herself after the breakdown of her marriage. Let herself go and become a recluse. A simple quote awakens something inside of her and she books a ticket to India. Helen’s journey to India is a chance to be free of her self imposed confines. Her journey is not just a physical one, but one the heart, soul and mind. The author has created such a captivating short story that is beautifully written. Within this short format, there is a sense of hope and of starting to imagine a life being lived. The author uses a few cultural references and at the end of the story, these are explained in a little more detail. There is some wonderful vivid imagery that the author has carefully and superbly incorporated. After I had finished Unlocked I had a wonderful sense of Helen being at peace. Also a little sad that it had finished, this is a story that I could have happily read in a longer format. The story is a tranquil and heartwarming read and I adored it and would definitely recommend it. This is a beautiful story that has a perfectly matching and beautiful cover. TOP 100 REVIEWER VINE VOICE

I very much enjoyed this short story, which works on two levels. First, as the tale of a middle-aged woman who has frozen inside following her husband’s infidelity. And secondly, as a love-note to India, its colourful, vivacious and sensuous landscapes, food and people. Recommended for anyone interested in a story of emotional recovery; and anyone who loves, or is curious about, the spellbinding country of India. AMAZON VERIFIED PURCHASE

Read this short story today, a wonderful escape from the current Covid-19 epidemic, and inspires hope for our own adventures in the future. Soulla writes very evocatively and rather sensuously, always a page turner!! AMAZON REVIEWER

My inspiration for “Unlocked”

My inspiration came from my Epic Indian Adventure in February 2018 where I travelled to Delhi and then using the Indian train network travelled to Agra, Jaipur, Khajuraho, Varanassi and Mumbai. It was one of the best trips I have ever taken.

For more about my inspiration please read this wonderful interview with author Anne John-Ligali which was published to celebrate the short story’s release in December 2019.

Excerpt from the book

And in that stillness, in her aloneness, she found a soothing routine of sorts; she read books, wrote poetry and lived on a diet of toast and jam, huge mugs of peppermint tea and sporadic pizza deliveries.

The literary works, read over and over, sat in a neat pile against a backdrop of empty milk cartons, dirty laundry, her Gucci handbag and Louboutin stilettos. She spent hours at a time absorbing the words in Sputnik Sweetheart by Haruki Murakami, I know Why The Caged Bird Sings by Maya Angelou, On Entering the Sea by Nizar Qabbani and About The Night by Anat Talshin; a spiritual awakening blooming within her, her soul wanting to be free yet too afraid and bruised and depleted to even try.

I hope you read Unlocked and I’d really appreciate a review when you do! Thank you so much.

With much love, Soulla xx