Get the 12 Part Writer’s Guide Manual To Help You Write, Publish and Market Your Book….Click here for full details

Alexander and Maria is my third novel and the first to be published through a literary press, The Conrad Press. The ebook is out on 30 November 2020 and the paperback will be available in the UK to start with from 10 December 2020.

It’s a fabulously exciting time for me as an author to be working with an industry specialist who believes in my work (we all need that extra endorsement every now and again!) and who has also nominated the book for the Royal Society of Literature Ondaatje Prize 2021. 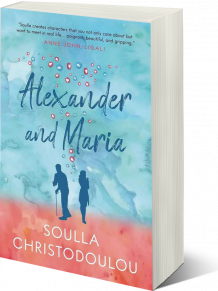 Buy It On Amazon

Excerpts From The Book

‘I don’t know. I don’t care! Just get away from me. I loved you with all my heart. I can’t believe you’ve done this.’ She stormed out of the room and up the stairs. She slammed the bedroom door, the force sending her wedding photograph on the wall next to a framed one of the three boys in Florida, crashing to the wooden floor. The Venetian frame splintered instantly, minute stalactites of glass everywhere, broken like her marriage."

"Georgia threw herself onto the bed next to Thalia. They both sighed, looked at each other and then rolled around laughing and screaming, We’re in New York!"

"For the first time in ages, Georgia felt the first shafts of light penetrating the darkness within her and the wave of emotion swiftly threatened to break into fresh tears at any moment, tears of relief and happiness."

Here's a short summary of the story for you:

With a storyline which touches on the book Love Virtually by Daniel Glattauer and Me Before You by Jojo Moyes, it is essentially about two older adults, Alexander and Maria, who looking for acceptance, adoration and fulfillment, befriend each other across Twitter; a platform they are both new to.

Alexander is locked in a loveless, cold marriage and has always hidden from life behind his Cerebral Palsy, though he may not have realised this until he meets Maria.

Maria, a single mother to teenager Natalie, is still reeling from her husband’s gambling and abandonment from years ago.

The messaging between them both builds momentum; Alexander is physically attracted to Maria and she is drawn in by his intellect and poetic prose, as well as being a little inquisitive about his condition.

They quickly engage in an all-consuming online relationship and eventually meet in London. Their physical attraction becomes real and emotions are high.

They both want to find a way to be together and a shocking revelation by his wife, Sandra, initially confuses Alexander’s decision to leave.

And Maria faces a complication too when Natalie reveals she is pregnant.

Will the time to be together be right for them?

Excerpt from the book

“An authentic story about love and life in all its messy, unpredictable, imperfect glory.

This book will grab your attention and then keep you captive between its pages. It’s a story of overcoming adversity in all its forms and its characters will stay with you long after you’ve reached the end. Sexy, passionate and written in a beautiful and sensitive prose.

Everyone deserves love a second time around, don’t they?

Alexander, locked in a loveless, cold marriage, has melted into the hum-drum of life, hiding behind his cerebral palsy. Maria, a single mother, is still reeling from her husband’s gambling and abandonment from years before.

I hope you enjoy the little taster from the book.

was the first in her family to go to university and studied BA Hotel & Catering Management at Portsmouth University. Years later, after having a

family of her own, she studied at Middlesex University gaining a

PGCE in Business Studies and an MA in Education. Formal creative writing classes in 2015 ignited her life-long love of writing.

She lives in north London and is currently working on her next two novels.

I hope you’ll try out my new book and when you do please leave me a review if you can. I’d really appreciate it.

Thank you so much.