The Summer Will Come Book Excerpt 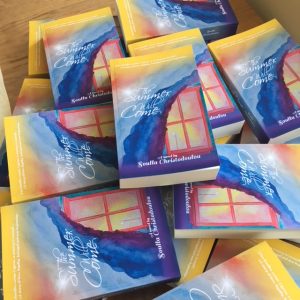 This is a short excerpt from a school scene in the village of Kato Lefkara, the home of Elena, her twin brother Andreas and their mother Evangelia. I’ve chosen to share this with you as it shows the children’s innocence and excitement about moving to London.

“It was the day of Kiria Nitsa’s visit from Larnaca and Elena was relieved to see she had still made it to the village despite the weather. She came into their class with a bundle of rolled sheets tied with string. She bid them good morning as she placed it with her bag of art materials on Kiria Maria’s desk. The children were thrilled to see her, especially Elena.

‘Ela,’ she addressed the class. ‘Over the holidays my cousin in England sent me some photographs.’ She pulled the knot on the string and released the bundle which unrolled, unravelling the photographs across the desk.

When the children saw the pictures of Big Ben and Buckingham Palace they were all in awe of the magnificent buildings. Elena took in the detail of each one. She was enthralled by the wide river and the clouds drifting in the sky. She looked in wonder at the tall cylindrical upright boxes.

‘What are they?’ she asked.

‘These are letter boxes for posting mail. Like our little yellow boxes. These are telephone boxes, like our green ones, with a phone fixed in them so you can make a call using coins. They’re also painted red.’

‘That’s called Big Ben, it’s a part of Westminster where the government resides and has meetings,’ explained Kiria Maria. ‘And this is where the Queen lives with her family when she is in London. This is Buckingham Palace, but she has many palaces to call home.’

The noise level in the room suddenly rose a few decibels as the children threw themselves into animated conversation and fired questions at her.

Kiria Maria stepped forward from behind her desk and glared at them all. Immediately they quietened and muttered their apologies, heads bent in obedience.

Desks were scraped across the floor as they were pushed together in fours to make room to accommodate the big pictures and painting sheets. The children settled into a quiet hum as Kiria Nitsa handed out pencils, paints and paint brushes. Kiria Maria gave a sheet of paper to each pupil.

‘That’s where we’re going to live,’ said Andreas to Niko, pointing to the picture of Buckingham Palace.

‘Don’t be silly. You can’t live with the Queen,’ chuckled Niko.

‘Not there with her. I mean in London.’

‘And that’s where you can post me a letter,’ said Niko, ‘if you learn to write,’ he sniggered.

Andreas shoved him in the side with his elbow. ‘I’ll be writing in English so you’d better learn to read!’ he shot back.

The boys eventually settled into a quiet harmony roughly replicating the buildings onto their sheets of paper and then, filling their brushes with too much paint, making a mess of their painting.

‘I’ll be able to telephone you from London,’ said Elena to Yioli.

‘Oh I will most definitely. We will have more money too so I’ll be able to telephone you every day if I want.’

‘You’ll be too busy with homework and new friends to remember me.’

‘No I won’t. And if I am I’ll telephone you when I finish. They don’t lock the telephone boxes at night!’ said Elena, leaning into her friend and hugging her tight.” 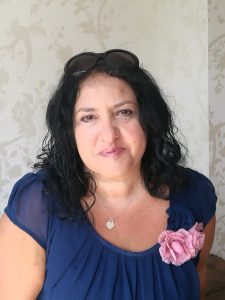 I hope you enjoyed this extract and are now eager to read the whole story.

Here is the link to buy from Amazon and if you live in the UK you can buy copies from me, personally signed and gift wrapped so why not treat yourself or a friend to a book gift?

Thank you so much and don’t forget to leave a comment below… it’ll make my day!