Celebrating Two Years since the Release of Broken Pieces of Tomorrow by Soulla Christodoulou, an Excerpt. 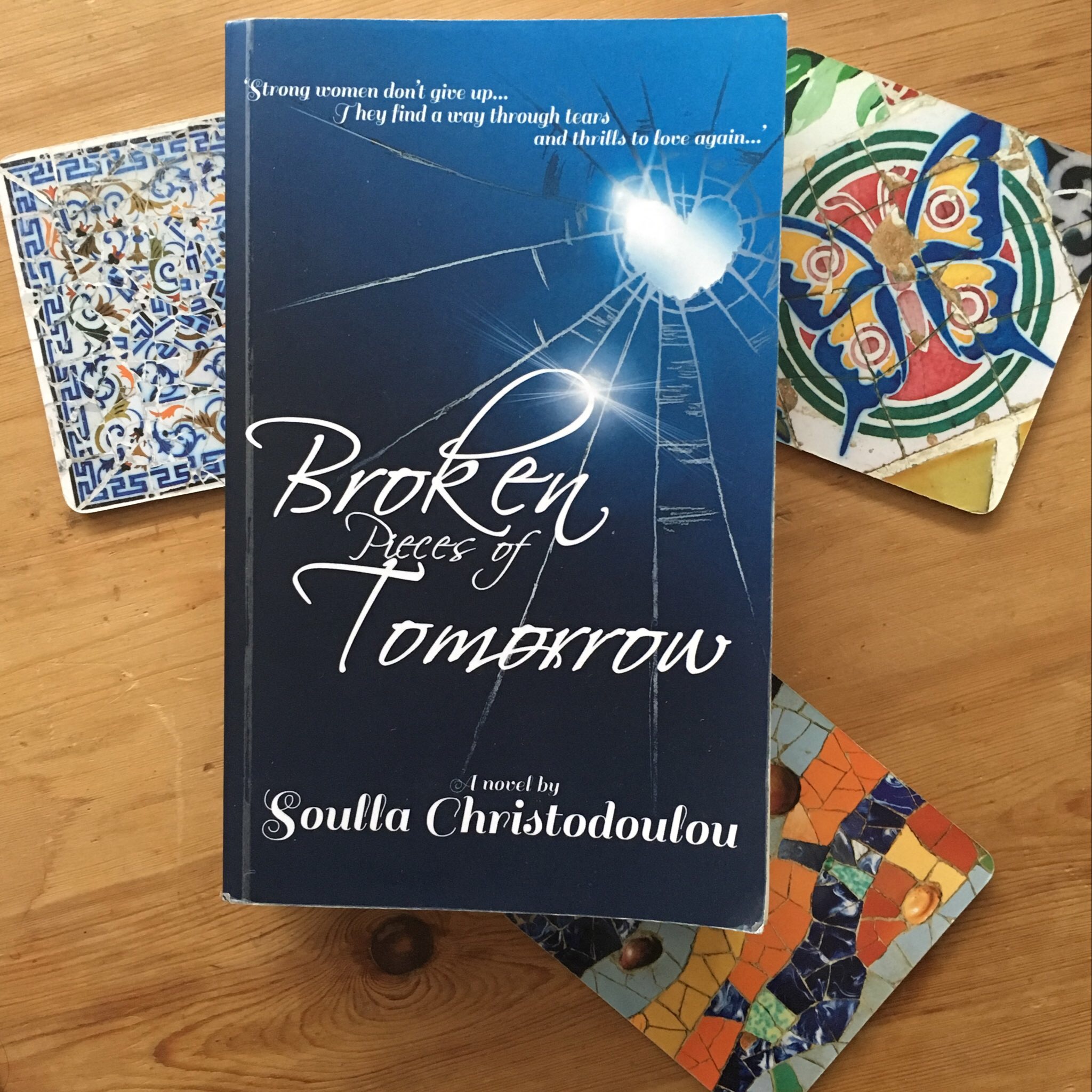 I’m celebrating two years since the e-book release of Broken Pieces of Tomorrow and wanted to share an excerpt with you. Readers have been overwhelmingly generous with their comments, feedback and reviews after reading the story. Sometimes I have to literally stop and breathe as I take in the fact readers from all over the world are enjoying the story; a story weaved with my own personal experiences. Life is not meant to be lived in a straight line, I know that, but the twist and turns in mine coming up to my 40th birthday, left their mark on me. For a long time I was in limbo; I didn’t allow myself the space or the time to think about what had happened to me. Instead I focused on my children, my career, finding a new path. Once I settled into my new lifestyle, I began to mull over everything that had happened and Broken Pieces of Tomorrow was born.

So as a way of celebrating here’s an excerpt from Broken Pieces of Tomorrow and I hope that you haven’t read the story you will now and if you haven’t left a review for me, you will now.

“‘Mum, Mum! Dad says come and move the bikes,’ shouted a sweaty, red-faced Andoni, helping himself to a swig of orange juice straight from the carton.

‘Tell him I’m in the middle of something. He’ll have to do it. And don’t drink out of the carton. Get a cup please.’ She moved away from the table and leaned up against the sink. Turning on the hot tap, she grabbed the sponge, soaked it with pink washing up liquid. She splashed water over the now dry crockery and pans she had done earlier and grabbing one of the frying pans she pretended to scrub away.

‘For God’s sake. You’re so slap-dash! Can’t you keep the drive clear? How am I meant to get onto it with their stupid bikes everywhere?’ Nicolas threw his jacket over the back of the kitchen chair.

‘Were they? I didn’t realise. The boys must have left them there.’ Georgia made no comment about his jacket which now lay on the floor, having slipped off the chair. She knew he wouldn’t pick it up. That was her job. ‘How was the match?’

‘It was a really good game actually. Andoni’s playing real good. And he’s fast. What are you doing? Why were the bikes on the drive? I’ve had to faff about moving them before I could park.’

‘The usual. Washing up, cooking… I took the boys to the park earlier for a bit. They loved it…saw one of their school friends down there. They had a great time but were so slow coming back. I thought I was never going to get home. Like snails they were.’

‘Stop moaning. If you didn’t want to take them, why did you? Always complaining about something.’

‘My mum called me earlier. My uncle phoned her.’ She hesitated, waiting for his reaction. ‘He told her you’re having an affair with Roksana.’ There, she’d said it. She’d said it even though she didn’t want to believe it. Even though it may be true.

‘You are fucking joking!’ The silence hung between them. ‘Oh, what a laugh that’s giving me! He’s such a waste of space! It’s that idiot who delivers the bacon and sausages for me. He’s been making it up.’

‘What’s he got to do with it? And why would he make it up? Why would he say anything to my uncle? They’re not best buddies are they? Uncle helps you out in the café now and again that’s all. He’s not going to be talking to the delivery man! Stop playing games and tell me the truth! Is that what these past few weeks have been all about? Are you seeing her? Are you sleeping with her? Are you fucking her? Are you?’ Her voice a whisper now, she felt her eyes well up with tears again.

‘Of course I’m not. He saw me at a coffee shop in Oakwood. I knew he’d put two and two together.’

‘What were you doing there?’

‘I was spying, you know, on the competition. To see what else I could do at the café to bring in some extra punters.’

‘Well, he must’ve seen me with her,’ Nicolas said, running his fingers through his hair.

‘Why didn’t you tell me you? Why go to Oakwood, nearly 3 miles away from you? That’s not competition there. It’s too far. When did you go?’

‘A while ago. I don’t remember the exact date.’

‘For God’s sake! Everywhere is competition. Remember I told you not to listen to any gossip. I knew the delivery guy would say something. He’s a slimy bastard. He’s jealous. He’s tried flirting with her before and she won’t rise to it. He’s a creep. I told her to keep away from him.’

‘I thought you said she had a boyfriend. And why do you care whether she flirts back or not? What’s it got to do with you?’

‘Well, I want her working, not flirting with the delivery guy!’ His face reddened. ‘What’s for lunch?’

‘Work it out! Can’t you smell it?’ Georgia stormed off leaving him standing in the kitchen to cope with the boys as they piled into the kitchen one by one wanting a drink. She needed time away from him. She went upstairs to the en-suite bathroom. She kicked the door shut and plonked herself down on the toilet. She swore under her breath over and over again until she calmed down and then she ran out the house without a word. ”

Thank you so much for reading and until next time, Happy Reading, Happy Writing, Happy You!