A Cup of Conversation with author Elaine Graham-Leigh 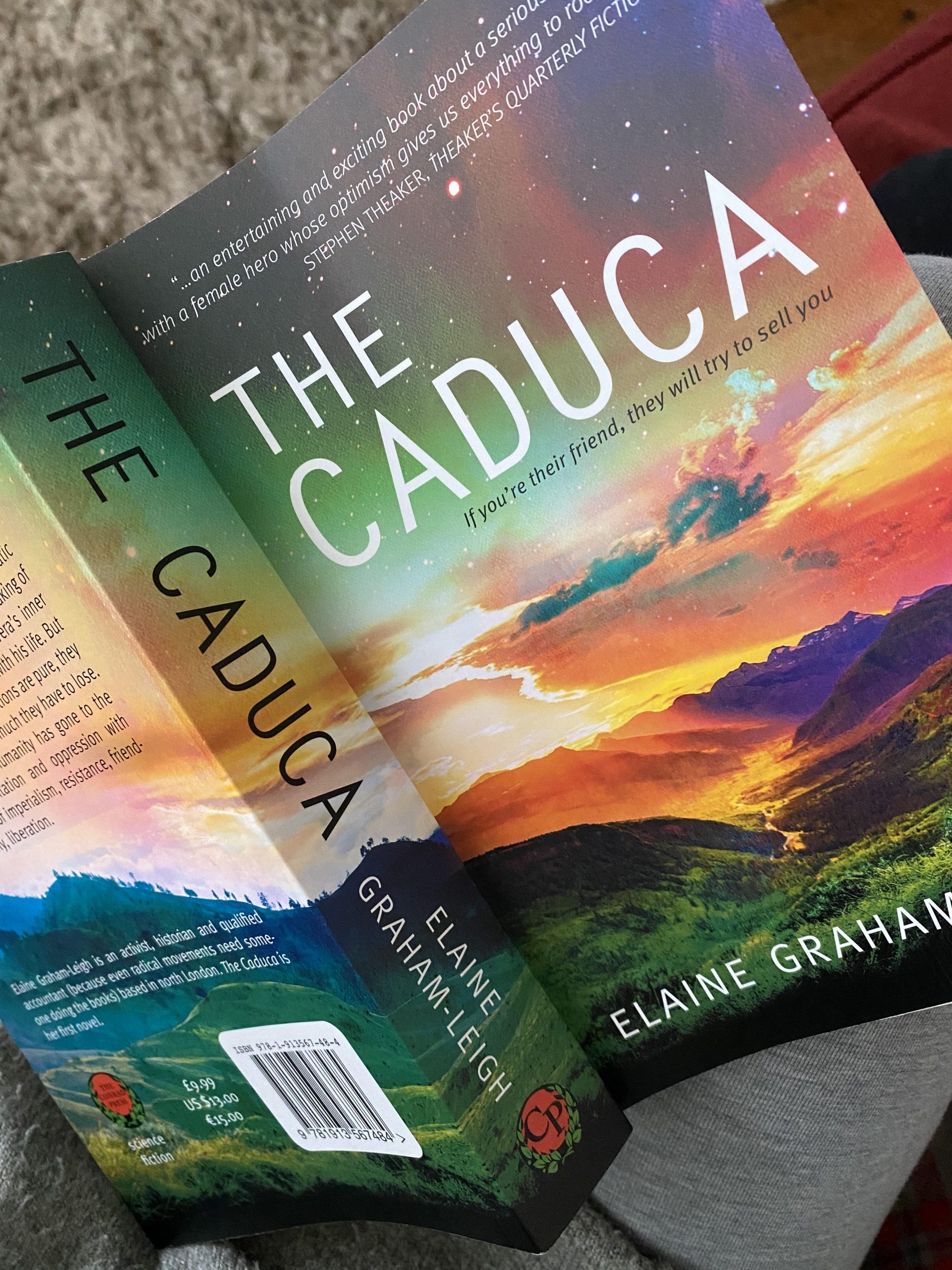 Hello and welcome to A Cup of Conversation where I am joined by author Elaine Graham-Leigh who is sharing her writing journey with us with some behind-the-scenes inspiration for the book as well as a book excerpt. Published by The Conrad Press, The Caduca, is a wonderfully written sci-fi book with some interesting themes and threads which Elaine shares with us here. Congratulations Elaine.

I’m grateful to have received a copy of the book in advance of this interview. I have read it and found it thoroughly enjoyable. You can also find My Book Love For post with my review here.

It’s a fascinating book of adventure and friendship, courage and resilience, inspiration and change; it gets you thinking and feeling a lot. 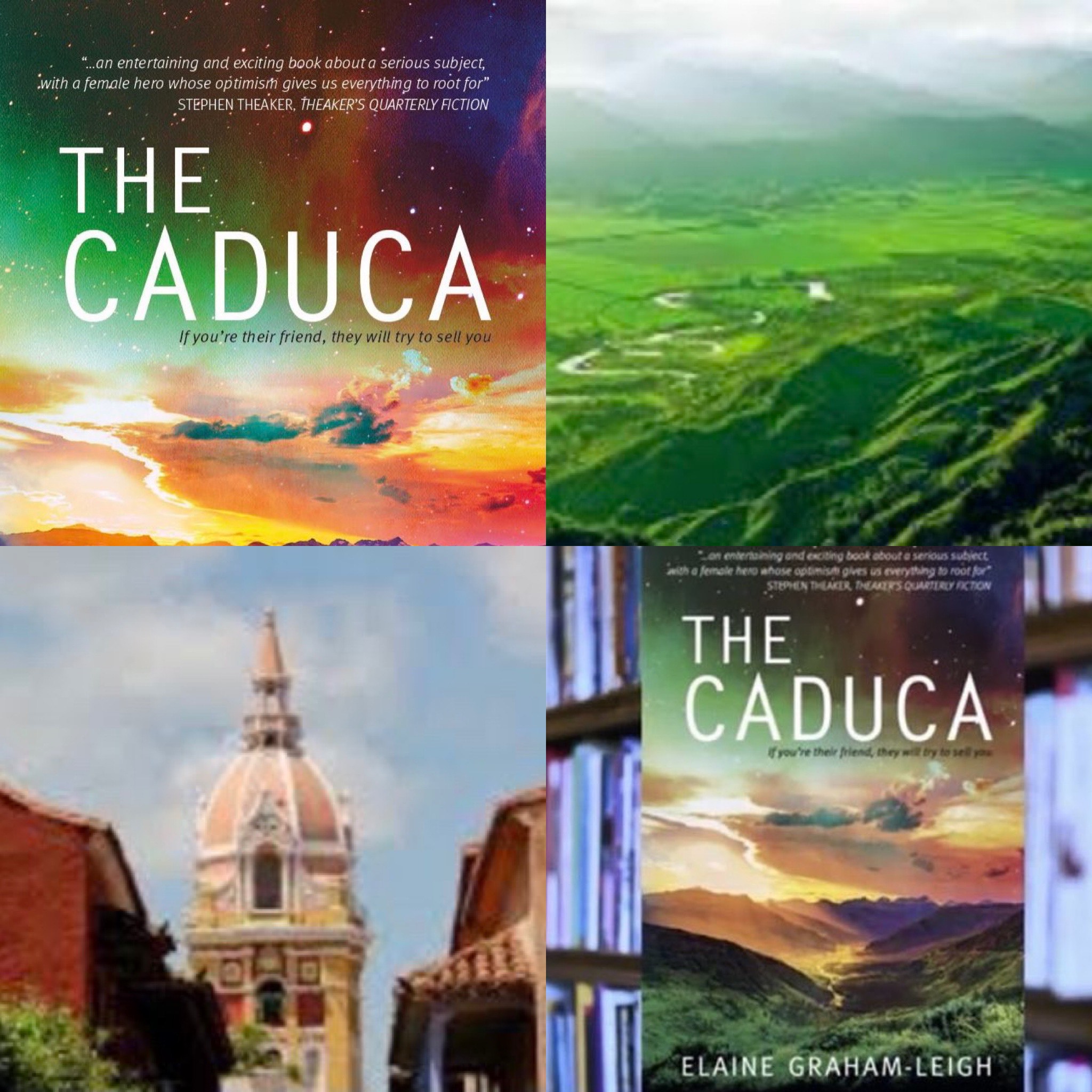 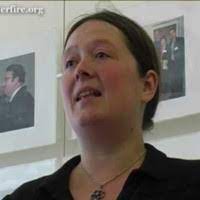 1. Welcome Elaine and congratulations on The Caduca. Can you tell us when you started writing creatively?

Pretty much when I learned to write! My first ‘novel’ was when I was about 4 or 5. It was about a goblin robber called Make the Take (because he took things. I was a literal child). It was only a few pages long, and half of those were written out by my mother to my dictation because my hand got tired – an early illustration there of the importance of support to novelists.

I finished my first full-length novel in my mid-twenties, though that one’s still sitting on my hard drive.

Since then, I’ve had a number of speculative fiction short stories published in different online and hard copy magazines (they’re all linked on my website www.redpuffin.net), but The Caduca is the first novel to see the light of day.

2. Tell us how climate change and your interest in medieval history have translated into your novel, The Caduca.

That’s a really good question, since The Caduca doesn’t deal with the climate crisis or medieval history directly at all. (Some of my short stories are more closely inspired by medieval history – I have one which is basically the 1381 Peasants Revolt in space.)

That makes it sound as if we don’t have any choice about how we are or what our societies are like, but really the opposite is true – it’s only by understanding the objective circumstances we’re in that we can change things for the better.

The Caduca is about characters trying, with limited resources and faulty information, to change their worlds for the better, so I think that’s the connection.

3. You are a member of Counterfire. Can you tell us what this is and how you got involved?

Counterfire is a socialist organisation ‘building the biggest possible movements against austerity, war and racism’ (as we say on our website: www.counterfire.org).

We’ve been going for more than 10 years and I’m proud to be one of the founder members.

Before Counterfire, I was involved in various campaigns and organisations (Stop the War, Campaign against Climate Change, etc) and I was in the Green Party for a while.

Topically at the moment, my very first political activity was campaigning to save Barnet Football Club, which became a general campaign against the way big money in football was changing the game. I helped organise a Fans United march in central London, back in 1999, and the rest, as they say, is history.

4. Your novel falls in the sci-fi genre, but surprisingly has many other interesting threads and themes. How did you choose what to include?

I don’t really decide, it comes organically out of the main plot and the characters. I’m sure it’s tremendously annoying when authors say that their characters tell them how their stories should develop, but it’s true! They do!

Some elements in the novel are expressions of my views on what future societies might be like – for example, there aren’t any robots in The Caduca, because I think human labour (and alien labour, in The Caduca) will always be cheaper and easier to exploit – but some just arise from me thinking, ‘what would that be like? How would that work?’

The nice thing about writing a book set 900 years or so in the future is that no one can fact-check me, but it still has to feel plausible.

5. Can I ask you to share a favourite excerpt from the book and tell us why you like it. (Not an easy one I know!)

This feels like a very conceited exercise, or else an invitation to identify the ‘darlings’ that standard advice to writers tells you to delete! But, here goes:

“Terise, carrying a basket of hebas from the orchard, stopped on top of the ridge to watch the tax party coming in. She let her eyes run over the blue and green scarves the younger men tied over their hair, her heart clenching as it always did until she made out Ladyani safely bringing up the rear. He had a strip of bright blue cloth bound round his forehead to keep the sweat from his eyes, and the red and grey tufts of his fringe poked up above it like weeds. He was senior to be going out on missions, but not even Issa dared to suggest that he should stop. He swaggered along behind his young troops, his rifle slung negligently over his shoulder as if it was just another Terran piece of rubbish and not the best weapon in camp. He looked happy, as if he was still fighting. It must have gone well.”

This is the first time you meet Terise, one of the two main characters in the book, and I like it because I think it manages to pack in a lot of information about her, Ladyani and the guerrilla group they’re in, without resorting to an info dump.

It’s hard to do that in speculative fiction, because there are so many invented things and concepts, but it’s essential, otherwise you’re continually bouncing the reader out of the characters’ viewpoints for a few paragraphs of authorial explanation.

6. What do you hope readers will take away from The Caduca?

That change is possible, even if it doesn’t come in ways or from groups that we expect.

Part of what I’m trying to do with The Caduca is give a voice to those who are overlooked and marginalised, even while they’re doing most of the work.

In fictional terms, that’s giving minor characters a little bit from their own viewpoints, so they aren’t just cannon fodder, but it’s also about stressing the importance of the most oppressed in the society in the book. I hope that comes across.

7. Who is your favourite character in The Caduca and why will readers like him/her?

Well, of course I like both my main characters equally and definitely don’t have a favourite (ahem). Rather embarrassingly though, my actual favourite character is one of the villains: Petrus Desailly, the head of the secret service at the start of the novel and the power behind the presidency.

He is definitely not a good guy (think Putin/Gaddafi/Peron/insert dictator of choice here) and I wondered quite a lot why I enjoyed writing him so much.

It was my partner, in fact, who pointed out that he’s the truth teller in the novel – he doesn’t pretend that he’s doing justice when he isn’t, he’s clear about how the world works and how he will take advantage of that.

That made him fun to write and I hope fun to read, but I’d hope my readers don’t actually agree with him!

8. What has your experience of writing the book taught you about yourself and your writing?

Partly that I can write a reasonably linear plot. My previous attempts at novel-writing used various tricks of structure to mean that I didn’t have to write a story from beginning to end, as I didn’t think I could do that and pace it properly.

The Caduca was the first time I tried to write a story head-on. I like to think it worked! It’s also the first piece of fiction I started that wasn’t in some way about me.

Since adolescence, my stories were almost always based around two sisters, who represented different choices, different pathways in life, and who both represented aspects of how I saw myself.

The Caduca still has that structure around two female characters, but neither Terise nor Quila is me in any meaningful way. There’s a sense in which The Caduca is the point when I realised I didn’t have to only tell my own story.

9. How do you build your imaginary worlds?

That’s an oddly difficult one. Everything in my sci-fi universe is based in what I know about politics, history, different societies and so on in our world, but I do very little specific research for my science fiction writing.

What I do do is a lot of work on the history of the universe I’ve invented – there’s a very complicated timeline spreadsheet covering several different civilisations for about 200 years.

There are some major events which are only mentioned in passing in The Caduca but which are covered in my short stories, and others which haven’t made it into print at all yet.

It’s really important to keep a handle on how it all fits together – I always think that if I want readers to believe in my universe, I have to at least keep my facts straight.

10. What has most surprised you about the writing community?

That it exists at all. When I started writing seriously social media wasn’t even a thing, so writing has always felt a very solitary activity.

I’ve only recently discovered the writing community on Twitter, but I’ve been in a writers’ group in real life for a couple of years. It’s made such a difference to my confidence – I’m sure I wouldn’t have published The Caduca without it.

11. What do you find most frustrating about the writing/publishing industry?

That the mainstream publishing industry has so far failed to spot my undoubted genius.

Seriously, I think the most galling thing is that there is still such a strong message that the traditional publishing industry is effective at finding and nurturing talent and is a good gatekeeper.

I still see so much commentary assuming that if you’re good, you will get a book deal, and that if you don’t, it’s because your stuff is rubbish.

There’s a lot of great self-published stuff out there – and still more stuff that’s an edit away from greatness – and a lot of mainstream publications that are seriously flawed, so that assumption clearly isn’t true.

I get that the big publishers can’t publish everything that’s submitted to them, obviously, but more acceptance of the evident fact that they aren’t the sole arbiters of quality would be welcome.

12. And finally, all writers, they say are readers. So what are you currently reading?

A couple of things at once, which is a bad habit of mine. The serious book on the go is Tom Lawson, The Last Man: A British Genocide in Tasmania, which is a brilliant, horrifying account of how the British government enabled and accepted the virtual destruction of the indigenous people of Tasmania and their culture.

For light relief, I’m re-reading Trudi Canavan’s Traitor Spy Trilogy, one of her several fantasy trilogies. She’s not always the most elegant writer, but I always enjoy how she brings serious thinking about class and exploitation into her plots. She’s one of a few writers I enjoy who show that progressive fantasy isn’t a contradiction in terms.

Thank you for joining us, Elaine and I wish you all the best as you continue to promote your book! I certainly enjoyed reading it and I’m .

And to my weekly readers, if you would like to link up with Elaine (any why wouldn’t you?!) you can do so on her links listed below.