A Cup of Conversation with author Andrew Mowere

Welcome to this week’s A Cup of Conversation with one of the first authors I connected with on Twitter and who, although is on the other side of the world, still  I remember reading first drafts of his first book and sending back little notes to him and now here we are celebrating the release of his book. It’s truly wonderful to be able to share this with him and to have you here. 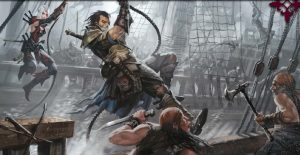 That must have been somewhere around late 2011 or early 2012. I had been raving to my loved one about a little book called ‘the name of the wind’ by Patrick Rothfuss when she politely asked, “You’re okay with English and your creativity steals you away so often. Couldn’t you do that?”

I answered, “Of course not, he…” I stopped. Why couldn’t I? Not on the same level, surely, but something clicked then. I could invent a story. The problem was simply writing it down. How do I gain that skill? What story would I want to write?

Surprisingly, I think my two companions (Meredith and Michael from AMM) take that cake. It’s not so much me saying that they’re better than a Pullman or a Tolkein, but rather that they’re so different in the way they approach writing. Michael has an air of precise mischief, and Meredith places the emotions of readers above all else. These things have begun to seep into my writing, simply because I read so much of theirs. Before this, I’d never read so much by the same author save for Rowling.

3. What was the last book you read and what lasting message did it leave?

A Stephen King novel, one of the Dark Tower books. It’s the one that mentions Charlie the train. I have never seen emotion twisted in that way. That book is the very definition of an eerie clown. It takes the things you believe are nonsensical and makes them into the most horrid things. It’s even more powerful because it lends a sense of truth. Maybe the important things in my life came from dumb coincidence. The sheer audacity in taking a song like Velcro Fly and turning it into a tribal drumbeat, far in the future, for people to murder one another with… I cannot imagine that.

4. Are any of the characters in your novel/s based on yourself?

I don’t rightly know. I’m not entirely sure what I’m like. Thinking back on it, I’ve largely avoided creating characters as simple as I feel myself to be. I’m a little worried about what that might end up saying about them…or about me. At this point, I remain a little far from going in that direction. They say that chefs always avoid their native cooking and then eventually come back home. I’m sure I will too.

Ah, this is actually an answer you seem uniquely qualified to understand. Azrael Windslayer is my favourite so far. I simply adore the inherent goodness and stubbornness he has in following his core belief.

Azrael Windslayer, dear readers, is a necromancer who believes that people shouldn’t die. Mischievous and at times cruel, he remains to this one faith because he thinks that as long as people could remain alive, they could become better people and then improve beyond our wildest belief. He would not wish the pain of death on anyone

6. Tell us a little about Adventus, your new release out on 1st September.

Adventus is the first of my novels set in Grimea, which is essentially made of Europe Middle East, East Asia, Central Africa, and Russia, but in a fantasy setting. In the year 1100 PK, three portals open, one in each of the continents other than Baku. In response, the world’s governments attempt to maintain diplomacy by sending a joint party of all these nations out to kill a specific creature. The point, it seems, is to prove that different races should live in peace. However, each government has something nefarious in mind…

Governments are enemies. People are friends.

8. Where do you like to write and do you have a writing routine?

Currently, at my desk. I suppose there is a routine of sorts. I drink a great deal of coffee and do nonsensical things for a few minutes, then put away all people, toys, and electronics and begin to write.

I don’t really snack. The closest I’ve come are slow meals or some vegetables. Perhaps some celery or carrots. There is something insidious about fruit, or so I am told. It might be the sugar. I don’t quite understand these things.

10. Is there any aspect of the writer’s life you most enjoy and why?

I love a few things about writing, not least of which is the feeling of when I write and come up with interesting phrases. I also quite enjoy finding out where a story goes. Thinking about it, I spoke to a friend yesterday about the joy I feel when I begin writing and the story takes charge. You’ll find me pacing in the kitchen, telling people about how unexpected I found the most recent twist.

11. Where do you find inspiration for your fantasy books?

Adventus was borne from my personal shame at the way some countries handled the Syrian refugee crisis. I wanted to reflect that shame in a fantasy setting.

Most often I begin with the world, I suppose. Many a teenager has sat with a friend and asked something to the effect of, “Dude, what if, like, some people had wings, but they’re really way deep down inside and couldn’t come out unless we were in danger? Wouldn’t, like, most superheroes in that world be suicidal people who just found out they had wings?”

I do something similar to that, and then I expand it. Sometimes, I begin by imagining a certain human being.

12. What aspect of the writer’s life frustrates you the most and why?

Goodness, I hate proofreading my work. It’s simply the most boring part, since I already know what I wrote and thus, know my own story. What is the point of reading my book seven more times, just to polish some sentences and plot points?

However, I’m warming up to even that part. Polishing my work has begun to feel like polishing a stone or a blade. It can do something better because of my continued efforts.

13. What three pieces of advice would you give a new writer?

Read: For god’s sake, please do this, even if you’re like Michael in that you only read half of a book before moving on. Your style will never evolve properly if it isn’t motivated by the tricks that you absorb.

Pantser all the way. Writing Adventus, I was aware of only a few facts: I knew that Yuuto was the great-grandson of an old character. I knew Adventus would happen and that there would be a global summit. And I had known about the terrible tale of Ur Istahla and Ayyur, which Ur recalls to Yuuto in chapter…31, I think it was. Other than that, it all appeared on the page as I typed.

Why, making Adventus a best-selling book, of course! We are currently on preorder, getting reviews, and we have every intention of making our week-long blog tour a smashing success.

Huge thanks Andrew for this wonderful interview and I wish you all the best with Adventus. And thank you my readers for joining us and Andrew’s links are below for keeping up-to-date with his books and writing life.