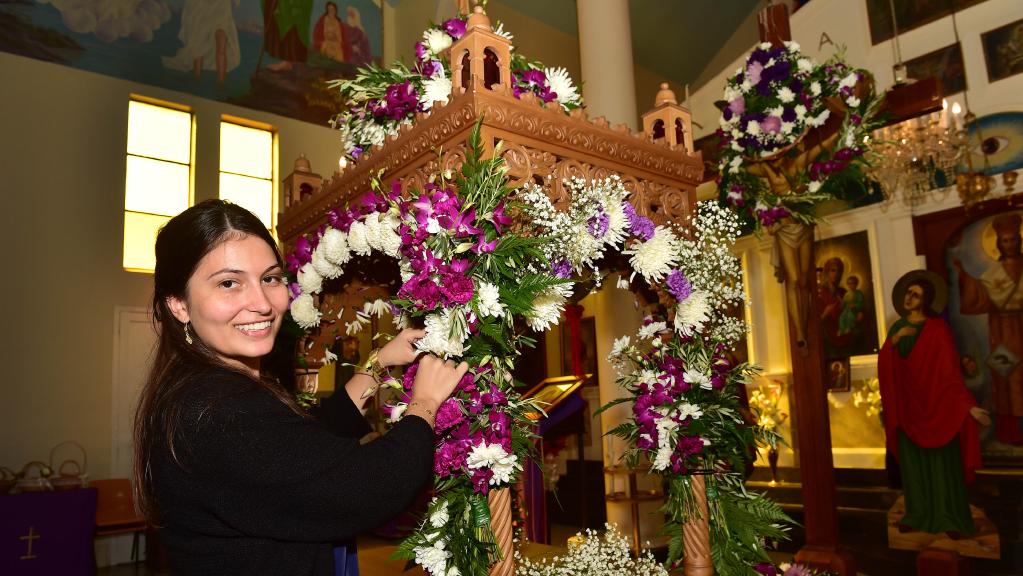 Welcome to my weekly blogpost!

I wanted to share with you the festival and traditions of a Greek Orthodox Easter. Pascha, Easter, is on the 8th April this year and represents the biggest religious holiday in Cyprus and across Greece and many Eastern Orthodox countries.

It doesn’t always fall at the same time as English Easter and this is because the Orthodox religion follows a different calendar. The Easter date is based on the Julian calendar, which differs from the Gregorian calendar that is followed by many western countries. Therefore, the Orthodox Easter period often occurs later than the Easter period that falls after the time of the March equinox.

I remember as a child how I always marvelled at the fact that some years I was lucky enough to celebrate two Easters living in London! English Easter for us meant literally over a hundred chocolate Easter eggs lined up across every available surface in my parents’ home. This was the biggest most exciting thing about English Easter. In contrast our Greek Easter was punctuated with traditions of fasting and baking, buying new outfits, preparing our homes for guests and going to church.

Lent is characterised by a 40-day fasting period of no meat, poultry or dairy products. In Cyprus hundreds of bakeries cater for those who fast by adding dairy-free, egg-free and meat-free pastries and cookies to their already busy kitchens. As a child I would fast for three days and generally, fasting today is followed more strictly in the villages of Cyprus than in the towns. 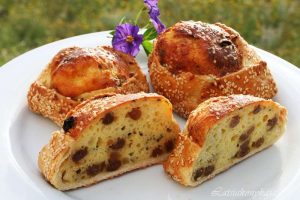 Thursday of Holy Week, which is today, is traditionally the day when flaounes are prepared and baked. (I baked mine yesterday with my mum and my sister). Pastry is rolled out and pressed into washed and dried sesame seeds and then filled with a mix of flour, eggs, cheese, mint and raisins or sultanas. These are shaped into triangles, squares or circles with crimped edges before being baked in the oven.

Eggs are hardboiled and dyed red and this is a tradition highlighted in my newly-released novel The Summer Will Come:

Elena stayed by the stove and watched as the water bubbled and the orange dye miraculously stained the shell of the eggs a dull cherry-red. Elena scooped them out with a slatted spoon into a bowl, careful not to break the outer shell.

‘They don’t look nice,’ she said, disappointed her efforts had not produced the shining glowy red eggs her mother always made. 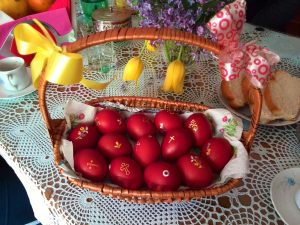 ‘Let them cool and then you can polish them with olive oil,’ said her mother. ‘That’s what brightens them.’

The eggs are used in a game where they are tapped against each other and whoever is left with an uncracked egg wins. The breaking of the eggs is symbolic of Christ breaking free from the tomb.

On the Friday morning before Easter flowers are collected and used to decorate the four-post canopied wooden litter in which the icon of Christ, the Epitaphio, is placed. That same evening a solemn service is held where the decorated Epitaphio is carried into the streets, for a short procession.

On Easter Saturday the main church service starts at 11 p.m. Just before midnight the lights in the church go out and the choir sings the story of the three women who arrived at Christ’s tomb only to find it empty. The lights are switched on again and the priest asks the congregation to “take from his candle the light which never dies.” The flame is passed from person to person until everyone is holding a lit candle. After midnight the service continues into the early hours of Sunday for another two and a half to three hours.

The celebrations really begin on Easter Sunday as the 40-day Fast is broken. Feasts of souvla, large pieces of lamb or pork cooked on an open charcoal fire, as well as salads, breads, cakes, biscuits, sweets, flaounes and wine. Lamb is the traditional Easter meal as the early Christians adopted this symbol from the Jews who sacrificed lambs for their Passover celebrations.

From Sunday lunchtime until Tuesday night, in village squares and churchyards, traditional food, games and live traditional Cypriot music are to be found. Everyone, Cypriot and non-Cypriot, is welcomed!

And on that note thank you for joining me and I will leave you with our traditional Easter greetings of Kopiaste! Christos Anesti! and Chronia Polla! – Welcome! Christ is Risen! and Happy New Year!

(This post was originally written for my book blog tour celebrating the release of The Summer Will Come and can also be read here.)