A Cup of Conversation with author Effie Kammenou

Welcome to A Cup of Conversation with wonderful writer and food blogger Effie Kammenou. I instantly warmed to Effie on Twitter and her shining, gently personality comes through in her interview. She is of Greek heritage and her series “The Gift Saga”has been inspired by her father’s stories as well as her own inquisitiveness and connection to her family’s roots. I hope you enjoy reading her “cup” as much as I enjoyed chatting to her. 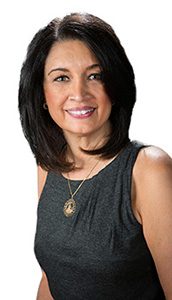 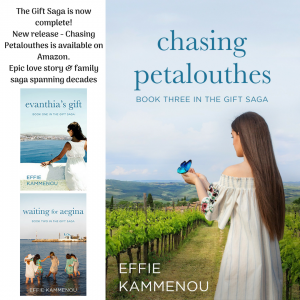 That is not an easy question to answer. The short answer would be 2012, about six months after my mother passed away. I wrote as an outlet to express myself and to channel my grief. But I had been writing a food blog for several years before that. In that blog, I not only shared recipes, but also the traditions and celebrations that went along with the foods. I also occasionally contributed to a regional magazine, writing restaurant and book reviews and feature articles. However, if I go back even further, I remember writing a play with a friend when we were barely in our teens. And to think I thought I was only interested in acting out the plays, not writing them!

2. Which author has most influenced your own writing style and how?

I can’t say that my writing style has been influence by any writer. I admire many authors, envy their eloquence and sophisticated use of the English language, but each author has his own style and own voice. Mine comes from my soul and life experience as well as my interests and observations of the people around me.

3. How would you describe your “The Gift Saga” series’ writing?

When I began writing the first book, Evanthia’s Gift, I wasn’t sure it would turn into a book. I was writing more as a form of therapy. Fifty-nine chapters and 560 pages later, I had a full novel that was the first of a three-part saga. I had a story line in my mind for a while and I expanded it, developing a character inspired by my mother’s grace and spirit. I also had a basic idea how I wanted to continue the saga with the other two books, but the details and the deeper story emerged as I wrote.

4. What is your favourite reading genre?

I love to read women’s fiction and contemporary romance with deeper themes. The occasional rom-com is fun too. I also like a good paranormal fiction. And I really enjoy revisiting the classics I grew up with. That doesn’t really answer your question, does it? I can’t pin it down to just one.

5. You have had an acting career in the past. How has acting influenced or supported your writing career?

Saying that I had an acting career is stretching it. I studied acting in college. I’d hoped to have an acting career. What I lacked at that time was the fortitude to forge ahead through rejections and the moxie to push my way through the right doors. And then there was that annoying reality called ‘making a living.’

My training did, however, influence the way in which I write and develop characters. The way I’d breathe life into a role by giving the character a history beyond the script is the same way I gave my characters in my books their personalities, traits and pasts.

I have a little corner of the living room which I refer to as my ‘writing nook.’ I must have made it too comfy though as my hubby is always sitting there! I don’t have a set routine- just whenever I have time.

6. How has your Greek heritage influenced the stories you write?

My Greek heritage is all over these books – the traditions, customs and religious holidays. The food and the spirit of the Greek people. The stories I’ve heard all my life and the experiences I’ve had. My observations of other Greeks and Greek-Americans and the dynamics of their families. All of these factors influenced my stories.

7. Tell us a bit about your latest release.

Chasing Petalouthes is the third and last book in The Gift Saga. This story focuses on the current generation in the family as they navigate their way from adolescence to adulthood. In the other two books the mains characters are women and it’s no different in this one.

Evvie has lived through the loss of her father and her most beloved yiayiá. Because of this, she thinks that closing her heart will protect her from future pain. She’s wilful and defiant at times in respect to her mother who has her best interest at heart but sometimes tries to force her hand in a direction that doesn’t interest her.

Stella is the youngest of a family of siblings and cousins who, in her mind, are all more attractive, intelligent and talented than she is. She suffers from a lack of self-esteem and that frame of mind lands her in a relationship with the wrong man.

Throughout the story, the younger generation learn lessons from the older members of their family. Many of the chapters drift back in time as far as 1928 before any of the family had come to America.

In the end, the entire saga is tied together in a very meaningful and heartfelt manner.

8. Where do you write and do you have a writing routine?

I have a home office connected to the kitchen. The joke in my family is that I only occupy one of two spaces in the house – the kitchen or the computer chair.

I work during the day, so I write in the evenings and on my day off. I’m a night owl. I sometimes can be found at the computer until 2 AM and then I get up to go to work in the morning. I can be a little obsessive once I’m in a writing zone. I hate to be interrupted and writing that late affords me a lot of quiet time.

9. How do you “build” your characters?

As I mentioned earlier, I develop characters the way I’d created and interpreted roles. I like to give each character a history even if it doesn’t come into play with the story line. But where they come from, the type of life they led and the experiences they’d gone through influences who they are, their traits and mannerisms.

10. What steps do you take to ensure your writing is ready for release?

I make quite a few revisions before anyone else lays eyes on it. I have a good friend, who I call my unofficial editor, and she is the first one to read through the manuscript. I take her suggestions and do another revision. With the first book, I had several beta readers and I’d made many changes after their read through. With this last book, I only had two beta readers before I handed it over to my editor. I make a few more revisions while working with her and when the manuscript is where we both want it to be, it goes out for a final proofread.

That all depends. Sometimes it’s dark chocolate and other times, chocolate licorice. But I’m really more of a savory food lover. Give me a few chunks of cheese and I’m a happy person. Especially kasseri!

12. I know you’re fond of cooking. Tell me a bit about your food blog and how your cooking has influenced this.

The food blog was started because people were always asking for my recipes. I thought it was an easy way to share them and also give a little backstory on what makes the dish I’m sharing special. Most of the recipes are family ones, taught to me by my mother and yiayiá. I’m proud of my Greek heritage and I enjoy explaining the customs and traditions that go along with our delicious foods. I also have other recipes, ones I’ve developed myself and aren’t necessarily Greek. I entertain a lot, especially in the summer, so I post those recipes as well. All three of the books contain recipes between some of the chapters. I did this for a couple of reasons. I simply couldn’t help myself! But I also thought for the non-Greek readers, the list of ingredients would aid in imagining what the foods in the text might taste like.

13. What two things frustrate you the most about the writing industry and how would you change these?

The industry has changed completely from ten years ago. The ability to self-publish has given me and other indie authors the opportunity to have our books on the market and in the hands of thousands of readers. I’ve been fortunate that my books have been well received and have sold to a large demographic.

The frustrating part is two-fold. The amount of time I spend on marketing takes away from my writing. I’m always looking for ways to reach new audiences and with all the different social media platforms there are today, I always seem to be on my phone or computer.

The other thing is that traditional publishers have not changed their business model or if they have, only minimally. Indie books are selling at a rapid rate. Readers are buying them and discovering new authors, but unless an author has already sold tens of thousands of books on their own, the publishers won’t take a chance on them. Getting your manuscript into the hands of an agent willing to take you as a client is as hard as getting a publisher to consider your book. And you can’t get a publisher to look at your book unless you have an agent. I’ve already gone through this before with my so-called acting career.

All in all, I’m happy to have control over my work, so I just keep going, writing and promoting. I’m lucky to have a fan base that is enthusiastic when I release a new book. I love interacting with readers on social media and I appreciate their comments and reviews.

Chasing Petaouthes was only released on June 3, 2018. I’m busy marketing the book and looking for new readers for the entire series now that it’s complete. I’m working with my cover designer and formatter to create a box set so it can be purchased together at a discounted rate.

I also have notes on the next series and plan to begin writing in a month or so.

I also need to build an author website, something I’ve put off. I’ll be working on that as well.

Huge thanks to Effie for joining us and I wish you the very best of luck with the new release! Thank you too for reading – leave a comment too if you have a spare few minutes. You can connect and follow Effie’s writing journey and buy her books on any of her links below: